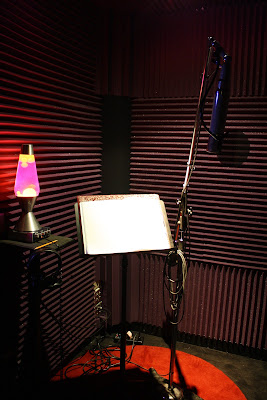 The time has come--I'm fresh off my first two days at  Cloud City Sound Studios in Portland, OR starting work with engineerJustin Phelps on my next album.  Though I've been working on demos for a few months, this week marks the official start of the album as a professional production.  It was an interesting and activity-packed couple of days with plenty of progress made--we tracked rhythm guitar for eight songs and vocals for four.  Although there will be numerous other instruments on the songs, getting a tight and accurate base skeleton of one instrument and vocals is one of the most crucial parts of the process.  Less quantifiably, I'm really glad to get the learning experience portion my first professional studio days behind me--the differences between demoing and recording (my last album was all home recorded) at home and in a professional studio are huge.  On the one hand, at home creative control and patience for perfectionism are absolute.  On the other hand, though, the ceiling for perfection is much higher at a professional studio, and the technical and creative input of a professional engineer like Justin are invaluable.  After I started getting through the jitters and self-consciousness of having to take and retake certain sections over and over, Justin and I were able to get in a good groove and the benefit of his professional experience became apparent--not only does it help to have input from someone who's approaching my songs and arrangements with fresh ears and a well-developed sense of taste, it's also helpful to have someone there to say, "Hey, that take was great, let's keep going" when I would probably continue trying to get every performance detail perfect (in my ears) before moving on.  Most of all, it feels really good to work with someone who is taking my vision and goals seriously and is investing himself creatively in the project--I know it'll be much stronger for it.  Having someone besides myself treat the project as something worthy of that investment is immeasurably boosting to my confidence.

As I continue to create this album I'm planning to continue this "Cheap Seats" series to both document my experiences and in hopes of providing people I know and all of you music "sharers" with an insight into what goes into the production of an album like the one I'm making.  I'd like to dig deeper into some of the unanswerable questions relating to modern music and the life of an independent musician like myself.  These questions include: What is the measurable value of music and music recordings?  What is non-commercial music and what's it's purpose?  Is it reasonable for a musician to attempt to make music a paying career, or should music only be pursued as a hobby?  Will more or less great music be created if musicians are poorly compensated financially?  How has modern technology impacted the creation and distribution of music recordings?  What are the reasonable responsibilities of a music consumer?  What does it take to be heard?  While these questions probably sound like the setup for a bitter rant, they are all complex issues with many sides and I'm hoping to get feedback from both musicians and music fans alike.  I'm just as much (or more) of a music fan as I am a musician, and consequently I think these issues are relevant to more than just independent musicians trying to make it big.  If anything, the goal of the pieces will be to show that there's much more to that MP3 or concert you just listened to than meets the ears and eyes.  Welcome to the world of an unknown independent musician and the process of recording a contribution to the vast abundance of music this world has to offer--you've got the cheapest seats in the house!
Posted by Jack Motherfucker at 下午8:43:00